Fifth place for Schrötter after podium-fight & unlucky crash for Lüthi.

Marcel Schrötter is leaving Termas de Rio Hondo with a laughing and a crying eye in third championship position, after he missed out on the podium yesterday. Tom Lüthi crashed out of the Grand Prix of Argentina after five laps.

Termas de Rio Hondo was another strong weekend for the Dynavolt Intact GP-Team. During the Warm-up, Marcel Schrötter and Tom Lüthi once again proved their promising pace with first and second position. But the excellent work of the Moto2 squad did not pay off after the 23 laps long battle.

Marcel Schrötter fought from second starting position for another podium place throughout the whole race. He even was leading the field for a few laps and was part of the leading group together with Remy Gardner and Lorenzo Baldassarri. After a mistake by Gardner, Lorenzo Baldassarri took advantage and took over the lead. Meanwhile Marcel occupied the second position, but he had to be aware of his followers who came closer with each lap. At the end it was Brad Binder who put the 26-years-old into trouble. Three laps to go they touched during the duel, Marcel had to go wide, had to settle with sixth position and had to burry his hopes for another Top-3-result.

UPDATE: After the race, Brad Binder has been demoted a place due to irresponsible riding. In this case Marcel Schrötter climbed up one position to fifth.

A contact with Brad Binder also was vital for the crash of Tom Lüthi. Because of difficulties with stopping his Kalex he slightly hit the Southafrican from behind inside a corner while being in eighth position and crashed.

It was an ungrateful end to the weekend for the Swiss, after he was fastest on Friday and had clinched a position in the second row on the grid in qualifying. But the 32-years-old, who is now in fifth championship position and the whole Intact GP-team is already looking towards America with confidence.

It wasn’t the hoped podium position, but nevertheless ten points in the championship that Marcel Schrötter is taking from Argentina. In third championship-position he is traveling to the next race, that will take place in two weeks, from 12th to 14th of April in Austin/Texas. 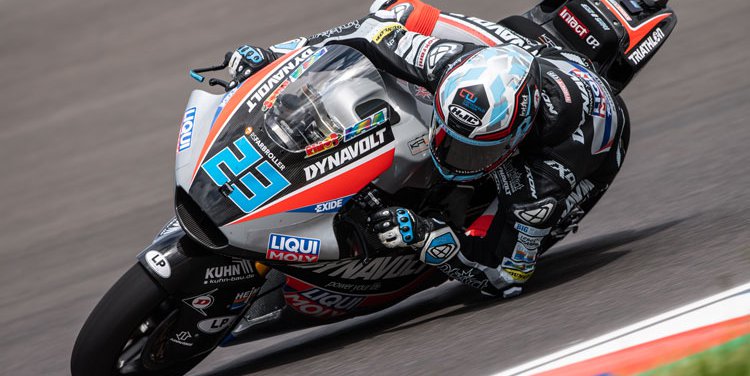